Amazon Lightsail is a virtual private server (VPS) provider and is the easiest way to get started with AWS for developers, small businesses, students, and other users who need a solution to build and host their applications on cloud. - https://aws.amazon.com/lightsail/faq/

Its supports instances, containers, databases and many other simple AWS features. For this post I will focus on containers. I initially made this post following Getting Started with Amazon Lightsail Containers: An Easy-to-Use Containers Service - AWS Online Tech Talks and then later fixed my mistakes following How to Setup an Nginx Reverse Proxy

Additional blog post Lightsail Containers: An Easy Way to Run your Containers in the Cloud

I eventually gave up and selected All Lightsail actions (lightsail:*) hence using the FullAccess suffix below.

I also got the error The Lightsail Control (lightsailctl) plugin was not found, I fixed this following the post Install the lightsailctl plugin on Windows

We also need to build the proxy image if its going to be used.

Testing the proxy image is not 100% possible as it will probably need host.docker.internal:5000 in the place of server ${APP_HOST}:${APP_PORT}; but you can atleast test the config for syntax errors.

This will do some AWS and Docker magic - note the image name returned, example :containerservice42.app-image.3. Container images sourced from your Lightsail container service, that are registered and stored on your service, start with a colon :.

We also need to push the proxy image if its going to be used. 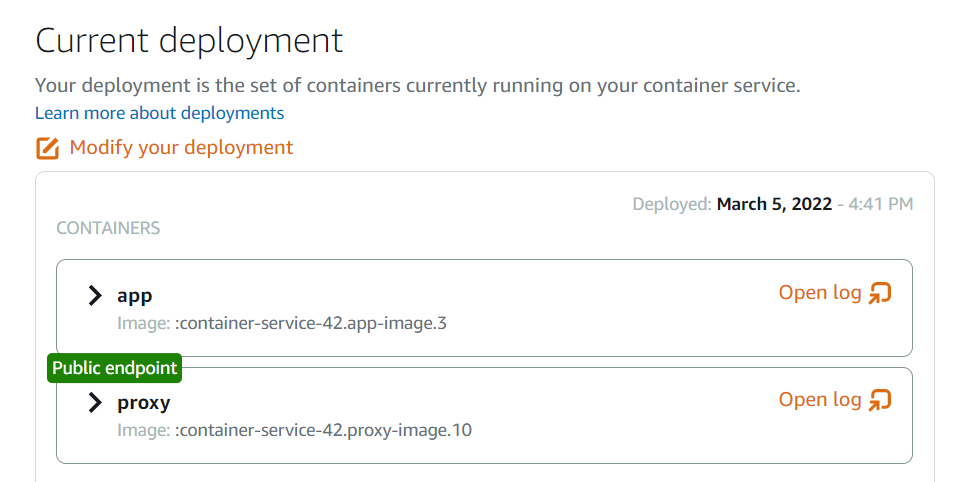 If you dont want to use the proxy then just set the public endpoint in public-endpoint.json to be as the below and remove the proxy attribute and its children from containers.json